I was delighted to be Involved in the recent tree planting initiative with Orla Farrell promoter of the  Easytreesie project. 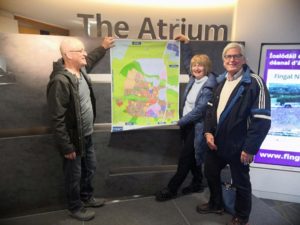 The Mayor of Fingal, Cllr Anthony Lavin helped to complete the planting of 1000 trees in Robswall’s Park in Malahide on Saturday, 26 January.

The Easy-Treesie initiative is part of the UN sponsored “Plant-for-the-Planet”programme inspired by teacher and Nobel Laureate Wangari Mathai and aims to plant one trillion trees globally.

Fingal County Council supplied the recycled Christmas tree mulch which the children ferried in wheelbarrows to the planted area. The scouts and students started the day with hot chocolate and cookies donated by the Gourmet Food Parlour.

The pupils were later joined at Malahide Parish Pastoral Centre by Fingal Mayor, Anthony Lavin, who awarded “Plant-for-the-Planet Climate Ambassador” certificates to all the participants.  This followed presentations by the pupils on the importance of tree planting for capturing carbon dioxide.

Mayor Lavin said: “It is a pleasure to properly recognize and thank the almost 50 children here today for giving up their Saturday to improve our public park. The native Irish trees chosen here by Fingal County Council will help improve the local amenity, combat global warming and increase biodiversity in the area. We are delighted to be affording these children the chance to be stewards of their own local environment.”

The Mayor was joined by fellow Councilor Joe Newman and many local volunteers including the Swords Woodland Association and Malahide Tidy towns.

The “Easy Treesie” initiative is part of the UN sponsored “Plant-for-the-Planet” programme inspired by teacher and Nobel Laureate Wangari Mathai and aims to plant 1 trillion trees globally. Children in over 100 countries have come together to tackle climate change through the symbolic and practical means of planting a tree in their locality.