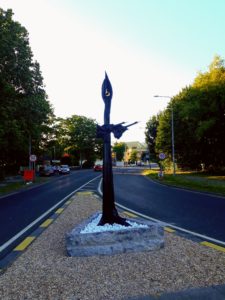 A variety of sculptures reflecting elements of the heritage, history and culture of the area have been installed by Fingal County Council in Swords over the past year.
The eye-catching new works, which have been put in place since 2017, add visual appeal and provide a link to the human and natural past amid the hustle and bustle of the modern town.

The projects were conceived and initiated by District Supervisor of Parks Colm Rigney, and implemented by the Operations Department.They can be found at four points in the town, at Pinnock Hill on the main entrance to the town; North Street/Seatown Road junction; Seatown Roundabout; and Estuary roundabout.This sculpture at Pinnock Hill features a spectacular four-metre high piece of bog oak from the Bog of Allen, which is “up to 5000 years old”, according to Mr Rigney. The surround of the bog oak is built from limestone kerbs taken from renovation works at North Street in Swords. Two swans with golden beaks in full flight are also depicted on their way to the Swords Estuary.

The sculpture on North Street features a piece of Cedar Glauca, which is approximately 100 years old, 14 foot in length and five inches thick. It features carvings of local landmarks like the Round Tower, Church Road, Swords Castle, Bridge St, and the Fingal County Council logo, with the words “Fáilte Sord 2018” in Gaelic script carved into the piece of cedar. Mr Rigney said this work is designed as “a welcome for all”. CNC carried out the inscription works. 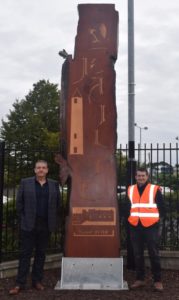 At Seatown Roundabout, formal planting and the installation of vintage farming equipment are intended “to tie up with some of the wonderful gardens in Fingal and our long standing affiliation with market gardening”, according to Mr Rigney. “It’s a place to while away the hours or just sit and relax for a few minutes”.

The Estuary Roundabout featuring Red Deer was inspired by the close connections of the animals to Fingal. Lord Talbot maintained own herd of red deer at Malahide Demesne around 1600, and Lord Considine of Portrane continued the breeding of this herd up to the early 1800s and donated some of his herd to Lambay Island in 1821, where they are still grazing there to this day. Lord Gainsfort of Howth Demesne also continued the breeding of a section of this herd up to the early 1800s. That group of Red Deer formed the backbone of the herd which has been bred successfully by the Ward Union since 1821 to the present.

A Rock Garden has also been constructed at Bridge Street which features a bespoke curved mahogany chatting bench. Along with planting of various trees and plants in the Garden, an original early 20th century hand water pump complete with Balrothery District Council plaque has been restored. A granite gate post recovered from Swords Castle during excavation works serves as the name stone at the entrance to the Garden; it is engraved with the name of the park in Irish and in the ancient Irish Alphabet of Ogham which dates from the 5th Century. 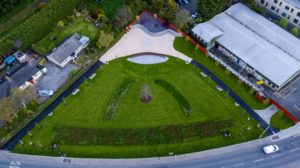 Director of Services in the Operations Department, David Storey said “the sculptures and improvements recently installed in Swords show the ingenuity and hard work of the Operations team. The projects are a proactive and interesting way of improving the public space for residents and visitors”.